This year the European Association of Archaeologists (EAA) met in Vilnius. This was my first visit to Lithuania, and I enjoyed it thoroughly; I always find eastern Europe to be vibrant, forward-looking and positive and this was no exception. The EAA is a wonderful forum for bringing together archaeologists across Europe, facilitating dialogue across a range of boundaries. This year's conference took place in the aftermath of the creation of a new boundary - the result of the UK referendum on EU membership. 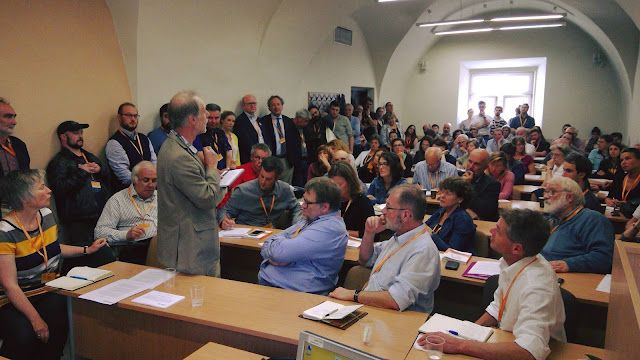 'Brexit' session at the EAA. Photograph by Felipe Criado Boado.

Indeed there was a special 'Brexit' session, hastily convened and well-attended. Interestingly, UK archaeologists have always comprised the single largest bloc of EAA delegates (estimates ranged from 30-40%); naturally as archaeologists we tend to see the broader temporal and geographical commonalities rather than differences. After all the British Isles only became an archipelago about 8,000 years ago.

The first was a discussion about Brexit. This covered territory that was familiar to UK colleagues - essentially a hand-wringing self-therapy about the loss of academic funding and contacts, the loss of free movement, and the potential loss of free exchange of ideas and ways of working; as well as the depressing expressions of xenophobia, racism and insularity which seem to characterise present-day public discourse in the UK.

However the second part of the session was much more interesting and indeed positive. Several delegates reminded us that the EAA had unwittingly conflated itself with the EU: the timetabling of next year's meeting at Maastrict to coincide with the 25th anniversary of the eponymous treaty was emblematic and symptomatic of this. We were reminded of previous conferences in Russia (2003), Norway (2011) and Turkey (2014) as examples of the EAA reaching out to a wider Europe that was culturally defined, rather than politically defined. The feeling seem to be that we had the opportunity to redefine 'European' archaeology on much wider terms.

The outcome of this session was therefore a very positive one. Ultimately there will be a rethinking of the role of the EAA as a mechanism for inclusivity of all archaeologists working on, in and around the continent of Europe as broadly as it can be defined. A working party has been established to consider how this might be achieved, and some very positive post-conference conversations have been had around this.

Archaeologists have a very important voice in the development of future society. We have an understanding of the long-term social changes that have taken place, and recognise the wide variety of environmental, territorial, technological and economic influences that give rise to those changes. Past performance is not necessarily a guide to the future, but there is a lot that our policy-makers for the future could learn from an understanding of the past. We need to be more self-confident in articulating some of those lessons.

There were other interesting sessions, of course, including one on climate change that was very challenging... the subject of a future post. The social events were fabulous. Many thanks to our hosts, and to the EAA committees who organised another memorable meeting.

I look forward to your post about climate change.

Thanks Jane; it may be a few days before I have time to post, but it was an interesting session which gave rise to a lot of thoughts.