This year's EAA conference took place in Maastricht last week. The old town of Maastricht is a delightfully tangled arrangement of narrow streets and little squares. However the conference was held in the MECC, a concrete convention centre about five minutes by train from the old town. 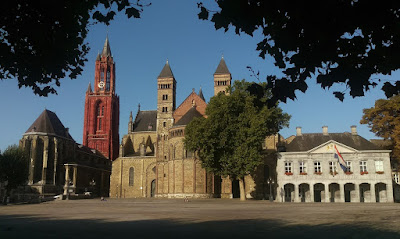 Nevertheless this was a good venue in that everything was under one roof. As usual the Netherlands impressed with its efficiency and friendliness. For personal reasons I was in Antwerp for part of the week, so spent some time on various trains shuttling between the Dutch-speaking part of Belgium and the Netherlands, passing through the French-speaking part of Belgium on the way. This reminded me in a very happy way of our massive pan-European road trip earlier this summer, which I should post about sometime.

Anyway, the conference was held in the shadow the 25th anniversary of two important international agreements. First of course the eponymous treaty which led to the creation of the modern EU, including the notions of 'European citizenship' and 'ever closer union'. Sadly a handful of xenophobic bigots in the Tory party have rudely pulled the UK away from these ideals which have brought peace, prosperity, freedom of movement and cultural exchange. This annoys me immensely: I really don't understand why so many old people in the UK think peace, prosperity etc. are bad, and have decided to destroy their children's futures in such a horrific and incompetent manner.

Perhaps more relevantly, the second treaty is of course the catchily-named 'European Convention on the Protection of the Archaeological Heritage (Revised)', more commonly known as the Valetta (or Malta) Convention. 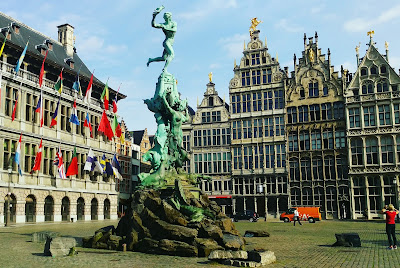 A gratuitous photograph of Antwerp, to make a point about freedom of movement.

There were two principal activities for me at the conference - aside from catching up with people, which I was not able to do as much as I would have liked.

Firstly I was there to help Jeroen Bouwmeester - a friend and colleague from the Netherlands - run a session on urban archaeology. We had of course done our first session together on this subject in the Hague (2010) and this was followed the following year by another one in Oslo. Despite further discussion in Helsinki, other things had intervened in both our lives and so it took until now to return to the subject.

Previous sessions had focussed very much on the act of urban archaeology and in the results that emerged. So there had been lots of discussion of exciting forms of medieval town plan, cesspits and so-on. This time however our focus was on the management of urban archaeology in 'highly dynamic' urban centres. The session was very much about the difficulties of extracting information under extremely pressured and difficult circumstances. We had a great range of papers from the Netherlands, Lithuania, Norway, Switzerland and Italy, and a superb discussion with wide-ranging contributions from as far away as the US and Jerusalem. As is often the case, there is much in common. 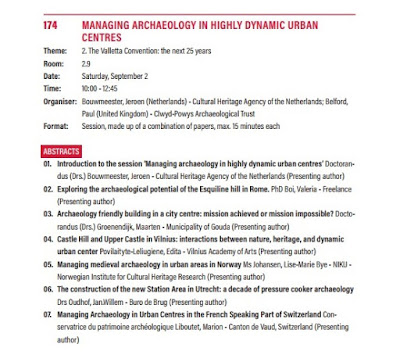 It was clear that Valetta had made some difference to the situation (in a good way) although there were still some alarming tales of the way in which archaeology had been dealt with in the past.

This was a hugely enjoyable session - and with 50 or so people in a small room it seemed very well-attended. All the credit for pulling everything together must go to Jeroen, who also provided a very interesting theoretical and methodological overview. This time we are determined to produce a publication - so we shall see how that goes!

My second main purpose at the EAA was to support my colleagues from the Chartered Institute for Archaeologists (CIfA) in developing links with the EAA itself and with archaeologists in particular countries (notably Germany and the Netherlands) who are trying to find ways of developing professional accreditation systems of their own. As well as two discussion sessions, the meeting also saw the signing of a formal Memorandum of Understanding between CIfA and the EAA. This means that the two organisations can mutually support and assist each other, and is a good step forward. 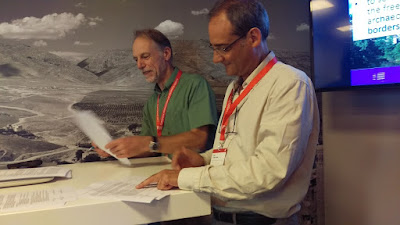 Signing of the MoU by Pete Hinton (left) of CIfA and Felipe Criado Boado of the EAA.

As ever the EAA was a wonderful event. There was much that I missed. Some of that was my own fault but some of it was also the very nature of such a large and complex event with 2,000 delegates and lots of overlapping and clashing sessions. Nevertheless I did find time to learn about medieval earthworks in Denmark and Iron Age fortifications in eastern Europe.

I am looking forward to the 2018 conference already!